News from the backyard

We are on a 4 day streak! The Talker has been on time to school everyday this week! The real challenge starts next Tuesday though, when The Princess and I start school AND I start driving the Tuesday/Thursday carpool with a family that lives a couple of blocks away. Shouldn't be too much hassle, since the other girl is in The Talker's class and we have known her family for years.

The Princess and I have been busy out here this morning. The RacecarMan's dog (I just love writing that!) stopped by for a playdate with Mrs. RacecarMan. Big White Dog has been sleeping it off for an hour now. 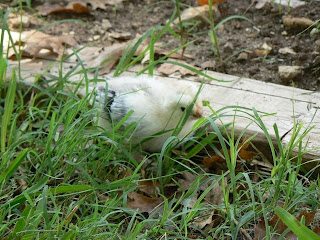 I could have used a hay baler this morning. Instead I decided to shove the mower through our backyard/overgrown jungle of a suburban lot. I was mowing it once a month. Then we got rain four or five times in a 10 day period. To say the grass was tall is an understatement. I lost The Princess for about 15 minutes. I was thinking about tying a rope around her waist the next time she came when I realized the mowing was finished and The girl was inside watching cartoons. 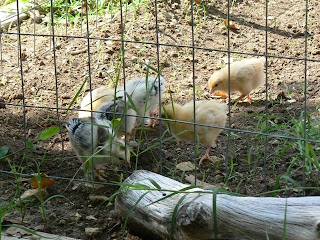 After the mowing, the chicks were introduced to the garden plot. This was the first time they have seen dirt. Watching the first one try to take a dust bath was quiet a sight. They are still small enough that they can walk right through the garden fence. The Princess worked for half an hour setting up a dust bath pan, complete with fresh herbs, for the chicks. 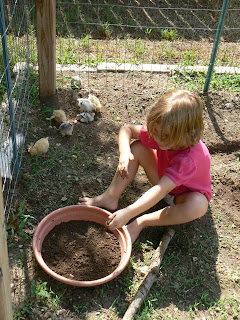 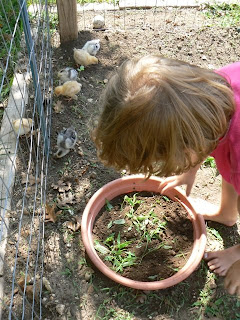 The Big White Dog got his first intro to having the chicks on the loose in the yard. He was totally fine if the chicks were in or out of the garden, but once they started weaving in and out of the fence, he was ready to herd them back into the garden. 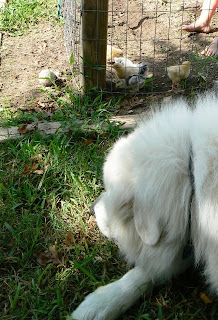 One chick caught a bug and she was cheeping so loudly with the bug in her mouth that all the others came running to her. Of course, she just showed off the bug and didn't want to share. The game of chase that lasted a couple of minutes was exciting for The Princess to watch, especially since the chicks were chasing all around, and over, her.

I still need to run the weed eater around the yard. Then it is time to move the mowing operation to the front yard. It has only been a week since I worked out there, but the neighbors will talk if I don't get to it before it gets too shaggy. And with the dog, cats, chickens and half dressed kids running around here, I already give them enough to talk about.

When my backyard became more meadow than yard, I tied a balloon to Mr. B so I could find him. Worked like a charm, until he figured out how to pop the balloon.

It's so nice to see the Princess out in the yard, instead of being glued to the TV. Of course she's got quite the incentive. Who'd not want to spend time with baby chicks. You must have to drag her away from that coup at the end of the day...

Now if only I could find a way to make a "Kid Tractor" - or get a dog to keep my kids herded up!

This is so much fun to read!

I can only imagine the flurry it would cause in my town (and my association) if I were to have chickens in my yard...

We have a family in town that are not going to be able to keep their three dogs because of the animal laws..

It goes against every Libertarian bone in my body...