the reports of my death are greatly exaggerated

AtHomeDaddy and the whole crew (mostly the whole crew, anyways - more about that later) have indeed survived the summer and we are gearing up to get back to school.

I posted earlier in the summer about our road trip adventures through the central US.  Since getting home from New Orleans we have been busy doing not a whole heck of a lot.  Which really isn't the reason for my lack of blogging.  Let's face it, facebook is easier and the audience is much narrower, so I tend to go there instead.

This blog has been around for 1850 posts and more than 6 years.  WOW! just rechecked my math.  8 years!!!   I just can't put it to bed.  I have gone through periods of posting multiple times a day and times that I posted once a month.  Heck I have a couple of other blogs that get updated quarterly.  If that.

Anyways,  I feel like a stranger in my own house when I pop back in here. Add to all of that the number of things that are now off limits.  I seldom post about school stuff because I am fairly strong in my opinion that I don't wanna get sued.  At least not for something I write on my blog.  If I get sued because of work, let's make it worthwhile.  I am talking US Air steward jumping out of the plane and sliding away with stolen beers, NUTS!  Of course, it is hard to find an inflatable emergency slide on the first floor of a public  middle school...  Challenge accepted!

Next week I start back for real.  Of course, my first day back this summer will also be my 3rd.  Or my  8th. Or my 12th.  Depends on who is counting.  It works like this.  I am on contract to work 187 days a year.  185 days occur during the school year, between staff training week and the last day of school.  Also, I must attend two full days of specific trainings over the summer months.  But I get to wear shorts and flip flops, so that isn't all bad...

The reality of teaching is that I spend June and part of July denying that school is coming back around.  I generally sign up to take additional classes over the summer, especially if I am changing classes/grades/curriculum areas (which I seem to EVERY year).  I went to about 5 or 6 days of these classes this year.  Still it is better than last year, when I went to 17!  After all of that, I start trying to get my thoughts together and getting my classroom set up ASAP in late July or early August.  Once I get that done, I start planning out my daily schedules and covering the big things.  And I plug all holidays into my calendar!

Anyways, I mainly work in my classroom because it is easier to stay focused on the upcoming year.  But, by the time teachers MUST return to school, I have been in my room almost daily for almost two weeks.  It shortens my summer, but I can work at my own pace and since I am on my own time, I can pick and choose the important things that get my attention.

Next Monday teachers report to campus at 8am.  It will be a rude awakening for us all.  But, I expect that in a couple of weeks we will all be back in the school routine and  plugging away through the academic year.

Of course, all of this is a lot easier since The Talker and The Princess still really like school.  They get excited at the end of each summer.  But based on the fact that I have given up another half a month of my summer and The Boss Lady has worked almost straight through, it seems that they take after their parents.

An aside - I don't think I ever mentioned the new dog on the blog.  Or the other new dog. The one one that came a month or so after the first new dog died two weeks after we brought her home from the animal shelter. 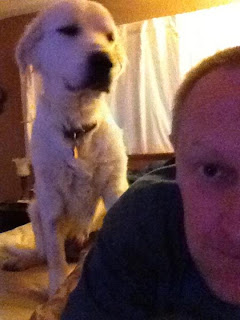 iLean  hanging out in the big bed, watching TV

In the Spring The Boss Lady let me know that we were prepping for the arrival later that week of a two year old Great Pyrenees girl pound puppy from the city shelter across town.  She had a rough life and was really timid, but we all grew instantly attached to iLean (because she always leaned on whoever happened to be nearest). Anyways, it was obvious in a few days that something was really wrong.  Our best guess is that she picked up an infection during her spay surgery.  So The Boss and I did one of the un-fun parent things and we decided to let our new girl go.  It sucks to have an animal put to sleep but this was one of those "right times".

The Princess was rocked even harder than the rest of us.  It sucks to be 8 and have someone tell you your newest pet is dead.  No doubt.

This summer we paid a visit to an animal shelter down the street from my school.  We went out to look at one Great Pyrenees girl but it was obvious that she was more work than we wanted to deal with.  While we were there, The Boss Lady and I finally told each other that we were individually thinking it was time to look for a small, lap dog that The Princess could really bond with.  Thus, we found Jingles, an 8 pound boy who was tagged as a long haired Chihuahua but we quickly realized was at least partly Papillion.  Best guess, Papillion and Dachshund mixed.  Evidently shaken AND stirred!  This is one crazy looking dog. 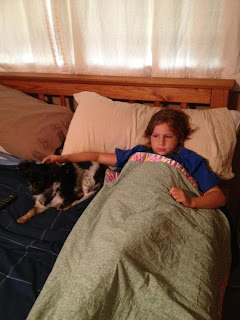 Sick in bed with her favorite Squirrel!

Anyways, our nefarious plan has worked almost perfectly.  Jingles was renamed Squirrel! and he is The Princess' best buddy.  This little guy is always just about one shake of a magic wand from being force-dressed in a tutu and tiara.  Lucky boy!