News from the coop.

It has been a while since I blogged anything about the chickens. I took a little time this afternoon to get the birds a little better set-up for our brutal :) winter weather. And of course, I had to snap a few pics of the girls. 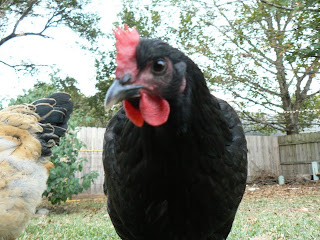 This is Flower, she is a 5 month old Australorp and based on the way that she has been hanging out in the nesting boxes all weekend, she should start laying eggs any day now. 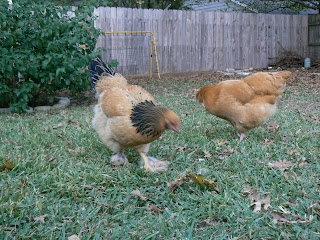 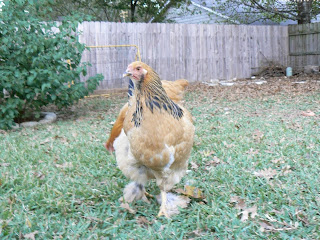 A couple of shots of Thing 1 (Or maybe it is Thing 2!?!) One of our 5 month old Buff Brahma pullets (with the gray feathers). The other bird is sometimes called Alarm Chicken, and sometimes called Nameless Bird or Butterscotch Jr. I guess the kids should get decided on a good name for her soon. 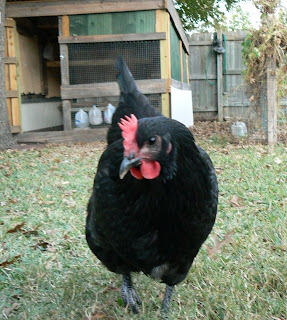 Flower is NOT camera shy. 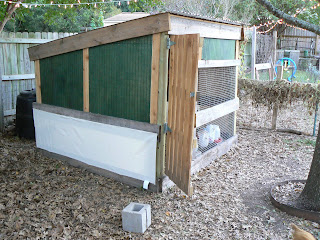 In an effort to keep the birds from getting too hot during the summers, our coop was built with wire fencing around the lower 2 feet of the entire perimeter. This allows air flow all summer long and keeps my from having to run a fan in the coop. The extra ventilation is also good for the birds, because they are not as susceptible to passing around respiratory illnesses in an open coop.

Anyway, it is already getting cooler at night and I want to keep the birds comfy. Happy, comfortable birds lay better eggs you know. But I also want to keep to the original low budget theme of our coop, so today I am trying out a canvas tarp, cut to fit, around three sides of the coop. Hopefully this will block most of the wind, while allowing a lot of airflow, too, since I am keeping the front of the coop open.