A season to remember, that is for sure!

This Christmas Season started out with a bang AND a scrape AND a crunch. The Boss Lady was side-swiped by a high school kid about a month ago. Her 2001 Beetle has seen better days and we had already been entertaining the idea of replacing it in short order (But the plan involved waiting a few more months at least).
When we started weighing our options with Itty Bitty, it started to make a little more sense to either let the insurance total the car or to sell it as soon as we could get the body damage fixed. 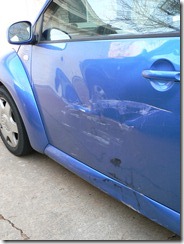 Somewhere along there I went insane and agreed to take a new job. I'll be leaving my High School teaching gig and moving over to a Junior High School (6-8 grades) at the start of next semester. The job is going to be crazy busy, but the paycheck should be nice.

The Boss Lady started finalizing her plans about the time I took the new job. But she really hit her car buying frenzy after going out to eat with a friend who has just bought a brand new Toyota SUV. After that lunch, a new car WOULD be bought. And soon, I guessed.

We went out a few days ago and we test drove a few cars. The Toyota Matrix and the Corolla were in contention for a while. But there were lots of cars ruled out. Nothing too small, nothing too big. Safety and good gas mileage were absolute requirements. the more airbags the better and the higher the mpg count, the betterer!

After we test drove a brand new MINI Cooper Clubman, we were thinking a lot about that car. (Probably me more than the wife.) I kept snooping around and found a 2009 MINI Cooper S Clubman sitting at a Chevy dealership a few miles from our house. The car had 12,ooo miles on it and it looks like it was previously owned by a germ-a-phobe. This thing is clean inside. 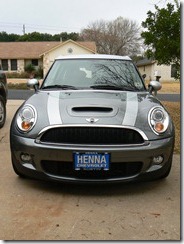 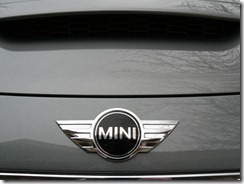 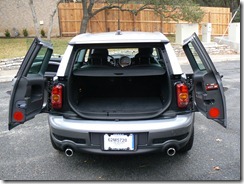 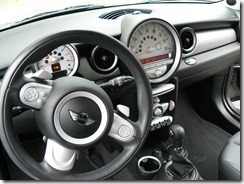 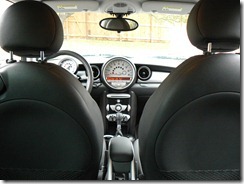 It is true. I haven't even started the new job and the car is already in the driveway. But it is also true that I won't be seeing much of this car once skool starts. I'll be too busy and The Boss will manage to keep her foot out of the turbo charger enough that she should get decent gas mileage in her new ride.

Me? Yeah, good gas mileage thing is not gonna happen. I am a dude! This car wants to be driven and he wants to get there in a hurry. So it looks like I'll be sticking with the Saturn Vue. Good thing my car will get me reliably to work. It looks like I'll be needing the paychecks very soon.

A side story about the new car - He already has a name, Randall.

The salesman treated us great. Never been happier to deal with a salesman. Really!

The guy's name is Randall. When The Boss and I got back home, I was joking that Randall had tempted me to really NEED that car. Then I tried out my best John Goodman impersonation, I quoted Scully from Monster's Inc. and said "Randall's your monster."

A day later and the name has stuck. Even the kids are running around saying "Randall's your monster!"

If I was in the zone for buying a new car, I'd definitely have my eye on the Clubman! Such a cute car wth good gas mileage....