Art and the Giant Spaghetti

The kids and I are trying to cram a lot of fun into the last week of summer. This morning's adventure had us exploring the Blanton Museum of Art, on the campus of The University of Texas. 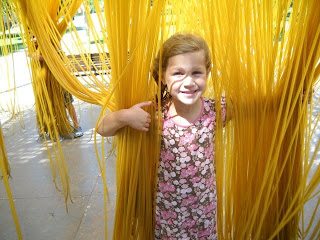 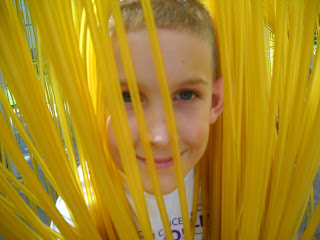 One of the all time favorites at the museum is an unnamed work outside of the museum. The Princess and The Talker dubbed it Giant Spaghetti. After we played in Giant Spaghetti for a wile, we explored the inside of the museum. There were loads of paintings that the kids were not too sure about, like Jo Baer's work, Horizontals Tiered (Vertical Diptych). They wanted to know why the museum was showing a painting with nothing on it.

Still, there are also several pieces on exhibit that the kids really seemed to connect with, like George Sugarman's Two in One and, for some reason, Claude Vignon's David with the Head of Goliath. They talked about that painting the entire rest of the visit and on the way home, too. And I certainly hope they don't get any ideas for my next birthday present.

Of course, we ended up the morning with another visit to Giant Spaghetti, stopping to grab a couple of pictures on the way to the car. 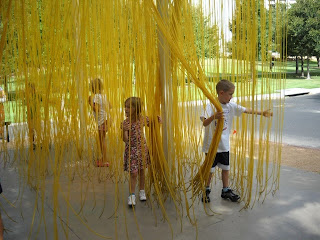 This looks like such a great time! Tomorrow when your kids go to school you will still be an at home dad whose job is just as important as when there were kids in the house all day. You will be the father who is available to take care of them when they are sick, volunteer when their school needs it, always able to still BE there when the time arises. I felt like I had been laid off last year when H went to kindergarten, that lasted about 1hr, and then I remembered a hundred things that I needed to get down. And I did them without a monkey clinging to my leg. So go forth AHD and run that household and family with the freedom that only comes when a monkey has been caged!