News from the coop

I tried to take full advantage of the first sunny afternoon we have had in about two weeks. I spent more than an hour cleaning the chicken coop today. Cleaning up after the birds is a messy job anyways, but it is almost impossible to do in the rain. Still, I had let it wait too long.

The chickens have decided to boycott the outdoor chicken coop that I created for them out of a re-purposed dog kennel and a couple of the big, plastic dog houses. They have started heading into my storage shed at night, where they had lived until I thought they were big enough to handle the weather outside.

The birds have less room inside the shed, but they evidently prefer it to the yard. I still had the brooder space in the shed set up, so they have taken that space back over. I'll be keeping the kennel/coop though. Hopefully the birds will be back out there when the rain lets up. 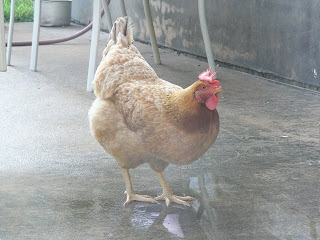 M&M (Mystery Meat) Our year old hen.
She has survived two dog attacks without a scratch and she still lays 5 eggs a week. 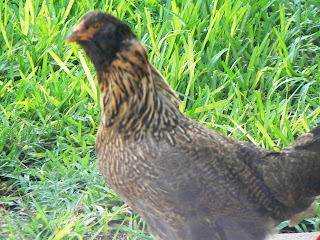 The Talker finally settled on a name for his girl.
This is Roadrunner, a 3 month old Ameraucana pullet.
She is one fast bird! 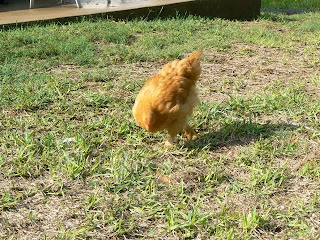 This is Gold Diamond, The Princess' 3 month old Buff Cochin.
Also known as GD Chicken. (Hey, the girl named her, I didn't!)

Yesterday we ran out of eggs. No big deal, except that The Boss Lady was cooking cornbread for dinner and she needed one more egg. Since our first birds started laying last spring we have not bought any eggs (except a few that we decorated at Easter).

I was about to go door to door to mooch an egg from neighbors, when I remembered to check the coop. M&M had laid a rare late afternoon egg. She saved my dinner! Hopefully in another 2 or 3 months M&M will have some reinforcements and the other birds will be laying eggs also.
Posted by Mike at 10/13/2009 04:16:00 PM

I haven't commented in a long time but I just love the chicken stories. Road Runner and Mystery Meat are great names. I think I would have to name one Drumstick or Buffalo Wings.