Back in the eggs

I just noticed a theme.

Gold Diamond finally came through when we were out of town. The Law Talking Guy and his kids came over to feed the dog and let the birds roam a little while we were in Ft Worth. While here they collected three eggs, one much smaller than the rest. He called me to make sure things were OK with the birds. I assured him that it was a "First Egg" and that they are usually noticeably smaller. 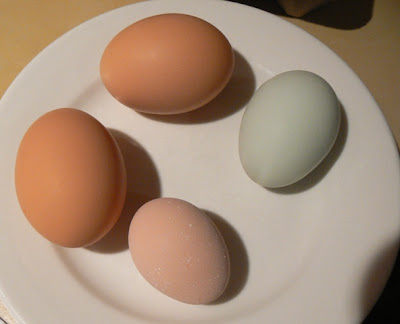 Gold Diamond, 5 month and 2 week old Buff Cochin's first egg.
In relation to two from M&M and one blue/green egg from Roadrunner the Easter Egger.

The Princess is still out of town with Grandma, so I'll save GD's first egg for her to see when she arrives home. But now that we have 3 laying hens again, I better warn the neighbors. With the birds laying somewhere near 18 a week, I'll be pushing lots of eggs off on them shortly.