It has taken 7 and a half months, about 100 pounds of feed and 10 chickens to get the job done, but we have our first egg! Check out the nice, smallish brown egg the kids and I found in the coop about an hour ago. 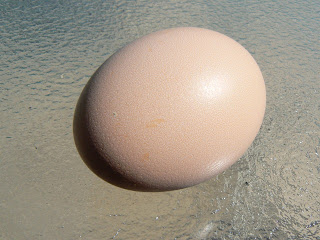 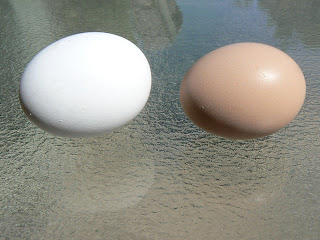 And here is the obligatory photo comparing our egg
to a grocery store Grade AA, extra large egg.

The kids were playing in the yard and and I decided to let the chickens run free for a while. When I headed for the coop, The Princess was convinced that one of the birds was missing. Luckily, Butterscotch was just sitting in the shade under the hen house. The egg was in the hen house, so I do not know which hen laid this one.

I did notice that M&M (Mystery Meat) was making an awful lot of noise this morning, so perhaps it is her egg. Either way, we are just glad it is finally here.

You "scared" it outta her when you chased her around the yard and stuffed her in a cat carrier this morning!!

Just in time for Easter!! How exciting. You'll have to hard boil it and slice it up four ways, ya know!

Congratulations on your long awaited victory!! Pretty soon you'll have more eggs than you can shake a skillet at!! :)