Friday fun in the sun!

This morning The Talker went for a bike ride. As he was riding out of the driveway and up to the cu-de-sac, I noticed that he was just about bent in half on his little 16 inch bike. After we raised the seat to it's highest possible position, it was obvious that the boy needs a bigger bike.

I figure he is bound to have a few crashes and near-misses on a larger bike, so The Boss Lady and I decided to look around for a good deal on a used 20" bike. There is a shopping center near us that is like the jackpot for used stuff. There is a Goodwill store right next door to a Salvation Army store. I cruised over there, without The Talker, to see if there was anything that might work.

The bikes were about what I expected Goodwill store bikes to be. Worn out and rusty from being locked up on the sidewalk in front of the stores. And they looked the same at the Salvation Army store, except for two bikes that were just leaning against the wall out front. New arrivals, I assumed.

One of those bikes looked about perfect. No rust to be found and only a few scratched up stickers. Nothing worse than The Talker would do to a new bike in a hard weekend.

I came home and got the boy and a tire pump. I guess letting the tires go flat keeps people from riding away too fast for the staff to catch up... He took one quick spin and was hooked. The bike is smaller than we were looking for, but it is still bigger than his "old" bike. And after seeing him cruise this one, I am not sure he is ready for anything bigger. 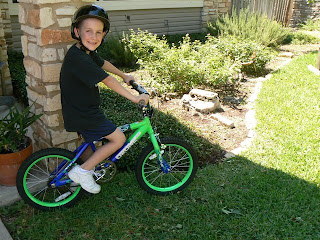 Anyways, we got a nice surprise when we went to pay. Half Price on Bikes Day! $20 for a (almost) new ride. Can't beat that deal.

And the scratches on the stickers? Already forgotten. The boy dang near killed himself trying to jump a curb already, so I bet it won't be too long before he adds a few scratches of his own to the new bike. 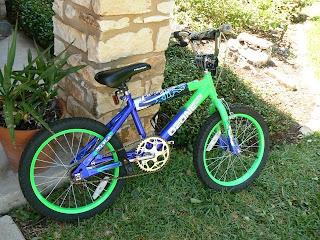 Sounds like a great deal and you don't have to worry about anyone not seeing the kid coming. That thing will glow in the dark.