The garden has really hit it's stride in the last few weeks. We have already harvested potatoes, a few jalapeno peppers, several pounds of lettuce and spinach, a quart of snow peas, dill, cilantro, sage, rosemary and oregano. Also, birds have beaten us to the two or three strawberries that we have grown.

A few years ago we had our first experience growing dill and the kids were amazed by the caterpillars that munched down our few plants. Once we found out that the caterpillars would grow into Black Swallowtail butterflies, we left them to eat the dill down to a nub. Since then we have grown lots of dill, just for the caterpillars. This year I made 3 plantings of dill, about a month between. And the caterpillars have found the goods! Thanks to The Boss Lady for all of the pictures. 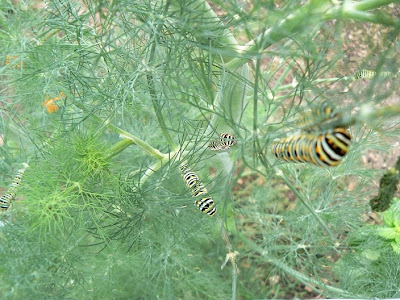 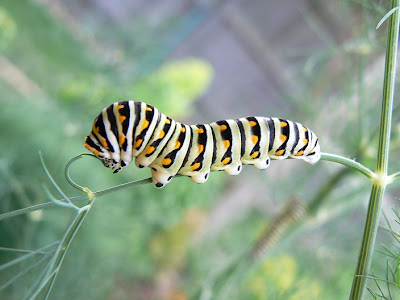 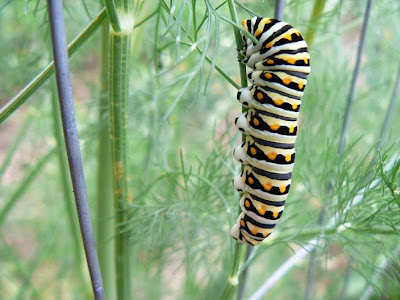 This morning I spotted another visitor to our garden, a Checkered Garter snake. I know they are harmless and we have seen these guys around our yard for the entire time we have lived here, but I still squeal and run away like a little girl anytime one pops out of the garden. This snake was resting underneath the potato vines. 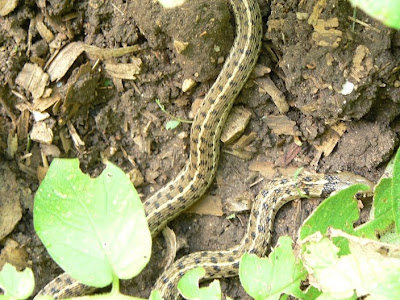 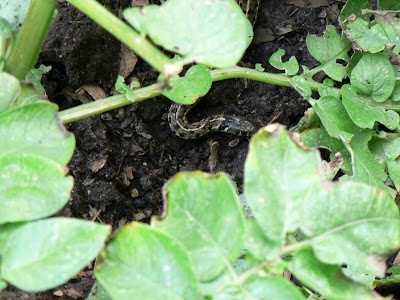 For the record, since I know there are lots of bugs attacking the potatoes right now, I made peace with the snake and left it to get it's fill. Now that I know he is there, he can eat all the bugs as long as I get the 'taters.

The rest of the garden is going crazy right now. The Princess helped me plant everything this year, so for the first time ever I gave up some space for flowers. We have Zinnias and Marigolds in bloom along with tomatoes on the vine. The eggplant is starting to fruit out and yesterday I spotted the first green bean on the vine.

Soon we will be dining on grilled green beans and pan fried eggplant while we watch our butterfly crop flit about the garden. Good times!

So many exciting visitors! And so much produce!

We only have some carrot and pea seeds in the ground, and hoping to plant our seedlings and other seeds next weekend.

Heck of a photographer for those caterpillar shots!

Ever since my daughter was born we have been gardening. She loves it and every year it has gotten a little larger. Having that small connection to nature in our city home had been great for the whole family. Beautiful photos.

Those caterpillar pic are great. Never thought I would type that sentence. I kill all snakes. Helpful or not. They are evil.