We have gone old school

When I left my The Queen Mother's house last week I brought home treasures. My favorite blue jeans jacket from elementary school, a favorite shirt that I am sure I often wore with that sweet jacket and my cub scout uniform. 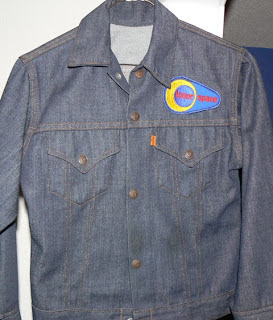 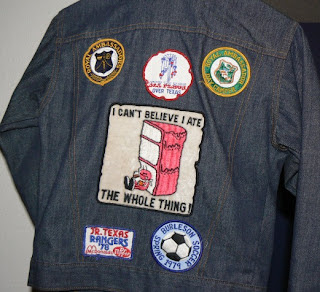 I was a super-stud in blue denim with this bad boy on. 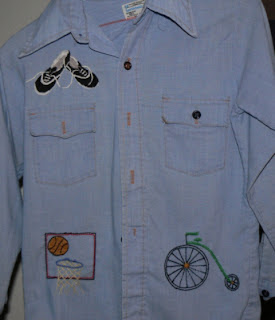 Can't you see the girls just fawning over a cool dude in this? The eagle was painted, the front designs were all embroidered.
I think this was a hand me down from a neighbor and mom covered his name with the striped panel and some iron on letters. 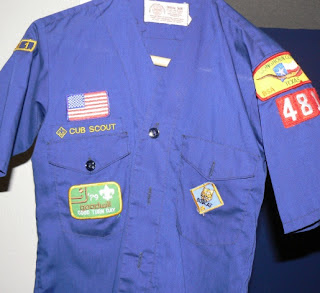 You'll notice a lack of badges and patches.
Much to the relief of the den leaders, my scout career only lasted one semester.

But the biggest treasure of my childhood, at least the main one that survived Bro's cleaning of our bedroom (which consisted of throwing anything of Little Bro's in the closest trash can...), was my Commodore 64 computer. I assumed it was still at mom and dad's house, but I had not seen it since 1991.

Rick created an online ode to his old computers a while back. I followed that up with a post about my old computers. Though I mentioned other machines, this one was my true love. I spent days on end each summer playing games with friends via our 300 baud modems. Of course, most of those guys lived in my neighborhood, so it would have been quicker to play Battleship in person, but in 1984 OUR WAY was way cooler!

Tonight I found the last connector I needed to set up the machine. The Talker and I got everything set-up in just a couple of minutes. Alas, I could not remember how to access the floppy disk directories or how to actually run the programs. 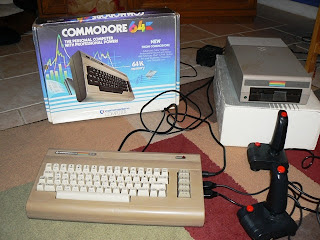 After an hour online I found most of the commands I needed. Luckily there are other geeks still living out their childhood computer hacking fantasies out there. The Talker and I played Frogger, some Dr J vs Larry Bird, some Arnold Palmer Golf and a few other games. Then I remembered that he eventually had to sleep and I still needed to study for the Sunday School lesson that I am supposed to teach in the morning. So I put the machine away for the night. Somehow I doubt it will be put away for 16 years this time...

I'll try to get some good screen shots of the various games and programs but the digital camera wasn't wanting to cooperate tonight. I guess it was afraid I would pull out the Polaroid soon.
Posted by Mike at 8/18/2007 09:52:00 PM

Comodore 64! Now that brings back memories..

Myself - I was a TI-99/4A guy myself, and the same senerio.. Hours on end, on the Comptuer with my friends, and my cousin (who was also a TI guy.) My "school" friends were Commodore guys, Vic 20 and the 64 - and I spent many an hour on their computers too.

My neighbor's Dad had a Timex Sinclair, and an Atari 800.

Wow, thoes were the days.

Now... If you can get a post up from the Commodore - I'd be REALLY impresssed!!

Good luck, and have fun with the Commodore!

I was cleaning out some Junkin' boxes and found some old cassettes.. Should I send them your way.. Sorry, the vinyl stays with me...I cannot believe I still own records....

HOLY CRAP! Just when I thought I didn't neet any more 80's reminders...

Where the floppies still good?