We are almost a week into the summer break and life is just as exciting as always around here. the kids are wearing themselves out playing all day and sleeping late in the mornings. So life is great for everyone.

The Princess and I picked up with a forgotten tradition a couple of days ago. When she does not have to be asleep by a certain time, to be ready for school the next morning, we read together. The last story we read was the original Beauty and the Beast by Jeanne-Marie LePrince de Beaumont. That is truly a short story and it only took us a few nights to knock out.

A few nights ago we started on Black Beauty by Anna Sewell. This is a much longer book and we will probably spend most of the summer nights working through it. I haven't read this since I was a kid, and I may have to read ahead soon, just to decide how we will read through (or skip through) the "bad stuff" that happens later in the story. The biggest downside of reading this story with a 6 year old girl has already happened at least once though. "Daddy, I REAAAAALY want a horse of my own."

It isn't a pony, but The Princess has recently gotten something else great. A new family has moved onto our block and they brought their very own 5 and 12 year old girls with them. The Princess is beside herself to have a new playmate living 4 houses away. There are more than 40 kids on our 2-block street, but there were no other 5-6 year old girls. Now we are fully stocked!

The Talker is loving the end of the school year. After 6 days of summer break he has yet to announce that he is "bored". And that may be the biggest success of our entire summer.

The AtHomeFarm is growing again. The kids have four new baby chicks. Last week we brought home a week old Black Australorp and a Buff Orpington. And a few days later we brought home two, 2 day old Buff Brahma chicks. I have bought all of our birds so far at the last real Farm and Ranch store in Austin. And I still love that store, but it is about a 2 hour round trip to Callahan's. This time we bought our birds at a little family owned feed store right in the middle of the city.

Going into Buck Moore Feed Store is like stepping back into the feed and seed store that we went to when I was a kid. Maybe that explains why we have been there 4 times in less than a month. They stock chicken breeds that I have never even seen, like the Australorp. 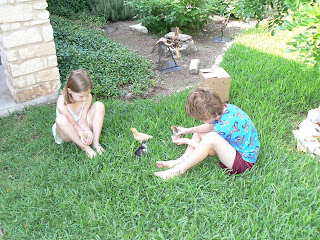 The kids took the new birds out for their first yard visit. 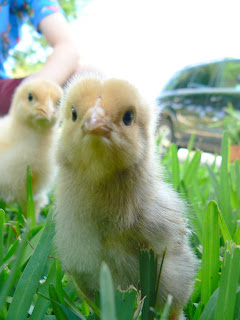 5 day old Buff Brahma chicks
Our 3 grown hens are laying like crazy. They keep us stocked with eggs. Which is good, since The Princess has discovered that she really likes hard boiled eggs. FYI, Fresh eggs do not make the best hard boiled eggs. They are too hard to peel and it is almost impossible to keep from tearing up the egg white.

Since deciding to grow the flock, I have also decided to build a permanent coop. Once my design was finished and I priced the lumber at about $500, I have decided to build a garden shed instead. I can build a shed twice the size, for less than twice the cost AND I can divide it into enclosed coop space for the birds and storage space for my garden tools. Plus I will be able to finally retire my hand-me-down, hail-damaged vinyl shed. Now I just have to find The Boss Lady's checkbook, so she can pay for this thing...

The garden is already showing signs of playing out from the summer heat. We have had several 100 degree days already and I can't keep enough water on the veggies to keep everything nice and green. I took everything we had harvested from the garden yesterday and made a veggie/beef stew. It was nice and yummy. Hopefully it isn't last of the harvest.

So there you have it and now, you may resume your summer fun.