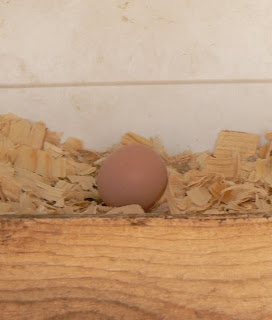 Butterscotch, The Princess' personal pet hen had not laid an egg. Until today.

This morning I noticed Butterscotch was hanging out in the coop inside my garden shed. I keep one nesting box in there, but it has gone mostly unused. The other two hens prefer laying their eggs in the Hen House, a converted dog house in the outdoor coop.

After a while I noticed Butterscotch was panting and had moved into the nesting box. An hour later she was out in the yard. The Princess went out and found the egg in the nesting box.

When do they start laying Lipitor?

I collected 36 eggs in a couple minutes at the store. So I'm right behind you.