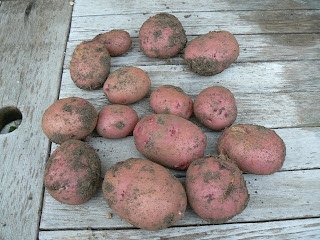 So I should have dug up all of my potatoes last week. Turns out they were the perfect size back then. Last night I was working out in the garden while the kids played on the oft' ignored playscape, I decided to dig out the last of the potatoes. Man, are they big.

I wanted to get oodles of small new potatoes. Turns out I got a lot fewer gargantuan sized tubers. 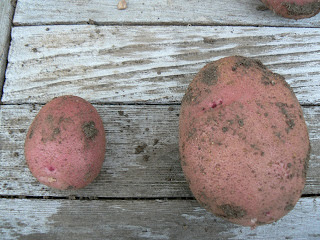 The one on the left, is about what I wanted to grow. The one on the right is as big as my fist. But I bet it still tastes good. I'll let you know after I feast this weekend. I planted a second crop of potatoes last night. Hopefully we will have a second harvest in the early fall.

In other garden news, we ate the first two peppers last night. The Talker even ate one.

On a dare. To get an early parole from time out. Now THAT is my boy!

We have two watermelons on the vine. They are the size of tennis balls. Good for the 4th of July, maybe. Cucumbers have some little ones on the vine, too.

I have bean picking (it's a pun, not a typo, damn it) about a pound of green beans every day. So we are now freezing them for later in the year.

I used to get hundreds of pounds of watermelons each year, thanks to a leak in the neighbor's sprinkler system.

This year I hope to get a couple of nice ones.

Hahahaha on a dare. Funny. Nice potatoes. I have been picking strawberries like a maniac. I'm jealous of your melon... no the watermelon silly. lol. I hope it's tasty!