AHD is in the game!

The kids and I went to the baseball game last night. The Boss Lady had to work late, and the kids were up an hour earlier than usual. So going out there I knew we still weren't going to watch a complete game.

With the usual runs to the bathroom, the playscape, the batting cages and the bounce house, I doubted that I would see any baseball at all. The small ball gods were smiling on us though. A homer came flying right at us in the second inning. Actually, it was aimed right at The Princess' head.

I jumped up and almost caught the ball. But more importantly, I got a couple of fingers on it and it popped right over The Princess' melon and into a guy's nachos behind us. Score one for the home team!

Earlier in the evening, on our trip to the bounce house, The Princess suffered a major wardrobe malfunction. She was wearing a jumper thing that only buttoned on the shoulders. The back was open. But it was really cute and she had worn it all day. Unluckily, one of the buttons popped off and the whole outfit was hanging on one shoulder, leaving most of her torso out in the weather. The straps were too short to tie together.

And that is when my Jedi-like dadding skills kicked in. I remembered earlier in the season that they were selling team lapel pins in the gift shop. We walked in and found one from a few seasons back for a buck! One quick pinning and The Princess' outfit was as good as new. She was dressed to support the home team, with their logo on her left shoulder.

The Princess and I sometimes have a rough go of things. She is even more stubborn than me. We both like to whine and cry and yell. Being told what to do? Yeah, neither of us are so much into that, either.

But last night we made a pretty good team and we got to put on a good show for all of our fans.

An aside, The Princess packed a purse to go to work like mommy yesterday morning. The Talker's dirty clothes hamper worked nicely. 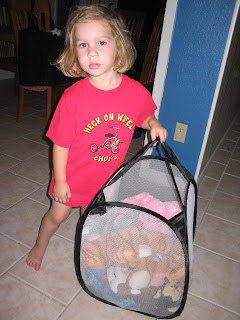 Great dadding skills. Laughing out loud at the idea of a wardrobe malfunction for a very little girl. Good story.

It's cute that she got packed like mommy. My daughter loves my purses and actually tries to steal them. Just Thursday she wanted my pretty little summery purse and was crying 'but I want that purse. Give it to me.' *sigh* Does it have to begin at 5?

Thanks for sharing the pic! I'm glad you had a great day.

You are the Man!