Even though I am sick of it, all of this rain has obviously been good for the garden. After church I picked 2 pounds of green beans, at least a pound of tomatoes, one real nice watermelon and two handfuls of peppers.

But the haul of the day goes to the cucumbers. I picked 16 of them. There must have been 3 pounds of cukes in the basket. 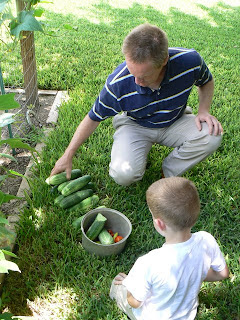 So I guess that is the pay off to the rain, which we are supposed to get a lot more of this week. 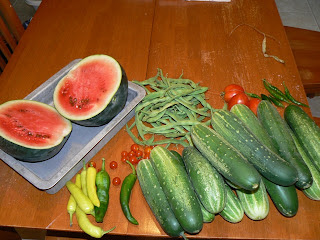 Also, soon after we planted our herbs this year, we found some caterpillars on the dill. After a neighbor told me that they would turn into beautiful butterflies. After I looked online, I found out that we have been hosting Black Swallowtail caterpillars. The kids have collected a few to watch inside, and we had one form a cocoon right beside our back door.

This morning The Princess came running in to wake me with the news that the butterfly had emerged outside. It must have just happened, because she was still stretching her wings out and drying off.

When we were picking cucumbers, The Talker and I found the butterfly again. This time she was getting a nice snack after a long nap. She was tucked inside the cucumber vines, sipping all of the flowers.

Of course, we had to go get The Princess up from her nap to see the beautiful butterfly they have been waiting for. Now both of them are really excited for their captive caterpillars to start building cocoons, because they want to see more butterflies. This is pretty much why I garden. I don't really care if the kids eat anything out of there. I just want them to appreciate all of the good stuff that happens while our food is growing. And you have to admit, it just doesn't get more exciting out there than finding 18 inch long cucumbers and 6 inch wide butterflies. 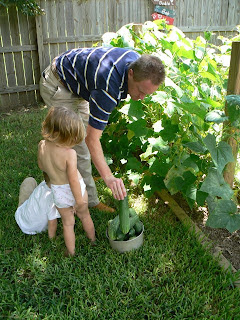 That's a great looking garden! Keep up the good work and think it could be 102 degrees instead of rain!
KRB

Oh, I bet those cucumbers were good, too!

Beautiful harvest. And those butterflies are so pretty.

That's a really nice harvest you have there! Not to mention the butterfies. And what a neat way to get your kids involved in nature.