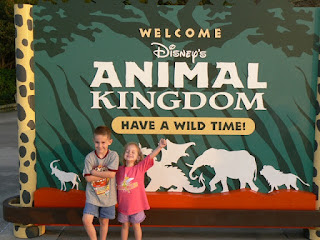 We spent only half of a day at the Animal Kingdom, on our Disney World adventure. The kids were pretty wiped out, so we did not do many of the attractions. We completely skipped over Dino Land. That just gives us a good reason to go back sooner, I think.

While we were in the Animal Kingdom we started out day out with the best show in the park. The Festival of the Lion King truly is worth the price of park admission, just as Ginger had assured us. And the Kilimanjaro Safaris ride was great, since we were able to ride early in the morning, while the animals were really active. 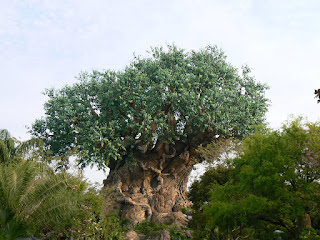 We rode the train into Rafiki's Conservation Station, where The Princess threw a huge fit and was rewarded by a cast member with free ice cream for her and The Talker. But the fit stopped and the Animal Kingdom cast member and I both knew that was all that mattered right then.

The Talker matched wits for about half an hour with a talking, robotic recycling can. I wish I had it on video. The highlight of the entire conversation revolved around a stinky diaper that someone fed the recycling can for lunch. High humor for the 5 year old set.

Now that I think about it, we really missed a lot of the Animal Kingdom. I can't really think of any other rides or shows that we caught while we were there. But we may have done more, I can't recall.

See, this is where the pin-trading mental illness took hold of me. And I got a bad case of it when I saw all the really cool Tigger pins for sale. I bought a hat with even more pins on it. And I traded some of those away for more Tigger pins. Actually, I got The Princess to do my trading for me. But she wasn't very focused and we ended up with a Flounder pin, a Daisy Duck pin and some other random stuff that I mostly swapped for Tiggers and Tinkerbelles when the girl wasn't looking.

Yep, we are now full blown Tigger and Tinkerbelle pin collectors. Or as the Talker declared, "we have a lot of tee tee pins!" We ended up with about 8 of each. The Talker decided the last day to try and collect some Buzz Lightyears, so we have those, too (including one that lights up!) Then there is a side collection that I started because it seems appropriate. I bought a Mike Wozowski pin and the next time we go to Disney I'll try to grab as many of those as we see.

When we hit Downtown Disney, I also got a framed pin set. And that is all the good that came of our trip to Downtown Disney. That and the Lego store. It kicked ass. The rest of Downtown Disney sucked ass... Except for the Princess statues. They made my daughter smile, so they are OK. But everything else over there sucked ass.

I am too tired to post pictures of them all now, but I will show off our pin collection soon. And you will be awes and amazed at what you can buy for a few hundred bucks! Instead, you can have this picture of me in my pin traders hat, standing at the exact point where I bought my first pins. The exact spot where my newest mental health issue kicked in. And a picture of my sanity slipping away has to be worth something, right? 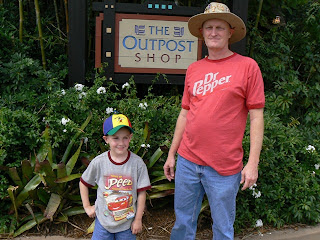 Love the T-shirt!! But we already knew Dr Pepper was the reaon for the little pot belly.. Thanks for spelling it out!!

YOu play nice or I'll call your mom and give her all the dirt about your new boyfriend and his 6 kids. And his motorcycle.

Hahaha The Dr. Pepper shirt is what I saw too! That's too funny! Hey, Mike, at least you're starting a new mental health issue in what I would guess is one of your favorite shirts.

Now you watch it, too missy. Fat people need love and lawyers, too.

When you talk to my mommy, be sure and tell her he is up for parole very soon!!!

You are a little too good at this game. I give up!

And please never talk to my mom.

Mike, I so-o enjoyed the Disney recap. The pin thing is good too. Now I know what to do with all of mine.
And all the chatter back and forth in comments is an art in itself.