We arrived at MGM Studios on the first night of our visit to Disney World. My nephew turned 4 that day, so what a better place to have a birthday than with Buzz Lightyear at Pizza Planet. The pizza was good and the arcade was a lot of fun. The boys had a blast running from game to game. The crowd was really thin, which made it even nicer.

It was during this time that The Boss Lady and I noticed how bad The Princess was feeling. So they left to go back to the hotel. The Boss spent hours on the phone trying to track down a Dr and a pharmacy to get a prescription filled at 10 in the evening.

The rest of us caught a Muppet's 3d show and rode Star Tours, a Star Wars ride. I think both of the boys got more than they bargained for on the ride, though. Neither of them seemed to enjoy the ride but maybe peer pressure kept them from getting too upset. Later, when we stopped back by MGM, The Talker wanted nothing to do with the Star Tours ride.

We went back to MGM several times to catch lots of shows. The kids two favorites were The Voyage of the Little Mermaid and a Playhouse Disney puppet show. The characters were out in force at MGM. We saw Jo Jo, The Little Einsteins, the green Army men from Toy Story, Buzz, Woody and Lightning McQueen and 'Mater from Cars. The Talker loved getting to hang out with Woody at Al's Toy Barn. 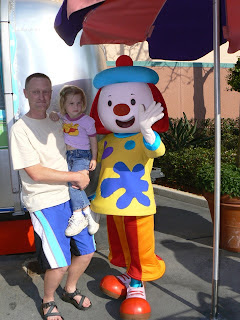 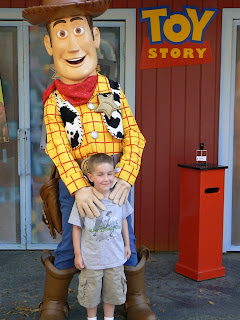 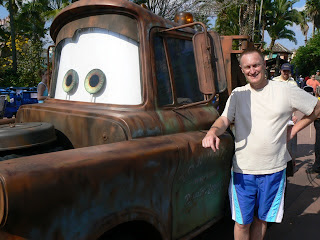 We only caught two of the parades while we were at the parks. We saw one during the afternoon at MGM. It features lots of characters and really cool cars. The other was at Magic Kingdom on our last night time trip there. 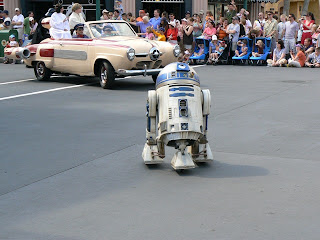 Though there were not a lot of rides for the kids at MGM, we ended up having a lot more fun than we expected. Next trip, we will spend more time there. And maybe next time I won't have to run around all afternoon in my swim suit.

It was at MGM that I witnessed my brother racing across the park to buy a souvenir pin, solely to trade it with a cast member who was wearing one he wanted to give to a friend's daughter for her collection.

More about my own battle with pin trading mental illness, later....

Woody! Very cool. We saw the big Disney ones, like Mickey, Goofy, Pluto, Minnie, the princesses... Over at California Adventure we saw Lightning McQueen and Mater, as well as Rubber Girl from The Incredibles.

We wanted to take a family photo with Minnie, but my son didn't want to pose (he has a thing about costumed people). I was waving him over and he was hiding behind a pole, and then Minnie just went over and grabbed him, shaking her finger in his face like she was scolding him. It actually made him laugh and he had a smile on his face in the photo.

Next time you go take crappy dollar store pins to trade for the good ones. That's what a friend did.

MGM rocked! My son loved the tower of terror (and was only 5) He screamed less than his daddy.

Glad you had a great time, thanks for the pics and I'm glad that the little ones got better. Sorry she had to run like that. That stinks.

Welcome back bud to the land of the bloggers.