Time for a Flat Stanley update.

Good ol' FS went to the Austin Children's Museum with us on Friday. After the museum we headed over to Austin City Hall to enjoy Live from the Plaza, featuring the Small Stars.

The Talker, The Princess, Flat Stanley and me all agreed that the music was WAY TOO LOUD, so we left after one song.

Flat Stanley had a good time, but he must have been tired after the trip, because he did not have a lot to say in the car on the way home. 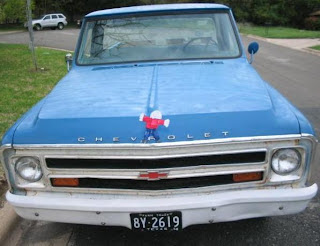 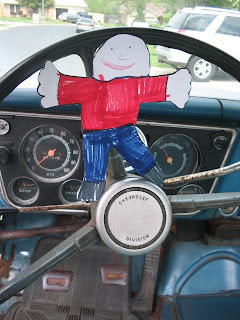 This morning FS and I drove my old truck over to The Talker's soccer game. Which was not only our first game of the season, but also my coaching debut. Flat Stanley helped me through the chaos of our first game and everyone had a lot of fun. I don't know if we won or not since Flat Stanley would not tell me the score after the game. 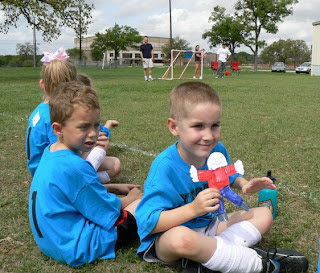 After our soccer game FS helped out in the garden for a little while. He helped plant some lettuce and watermelons. Too bad he won't be around this summer when the watermelons are nice and ripe. Here are a couple of picture of Flat Stanley with our pea plants and green bean plants. I think Flat Stanley would make a great scarecrow someday. 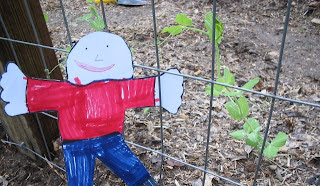 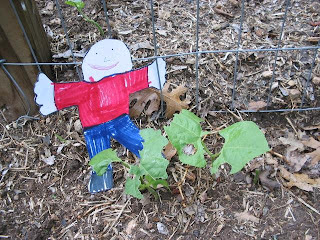 After working so hard in the garden, Flat Stanley decided to rest a little and pet Kodak, our Great Pyrenees dog. Kodak looks really excited to have Flat Stanley giving him attention, don't you think? 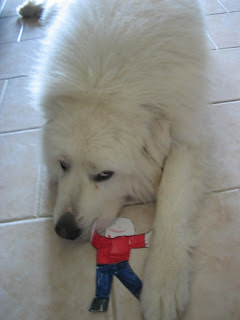 Monday Flat Stanley is going to tour some Texas History with us. We are planning to visit the Texas Capitol and maybe the Bob Bullock Texas History Museum. After that, Flat Stanley will be headed back to Alabama. Hopefully he will have some great stories to share with you guys about his trip to The Lone Star State.

Mike - I've enjoyed your disney antics. I just got my computer up and running again. I'm glad you guys had fun. You are WAY braver than me!

I got the biggest kick out of your flat stanley series. This one here was most amusing. It was so amusing that my 7 year old read it and laughed. :D (it should be known that my kids NEVER liked any of the shows on the Disney Channel but he still found the places Flat Stanley went to amusing.)

Lots of good stuff to tell in a little while.